Another WSU Vancouver class came to Fort Vancouver recently to beta test the FVM app. DTC 354 Digital Storytelling, co-taught by Dr. Dene Grigar and Greg Shine (chief ranger at Fort Vancouver), has been focusing its work on making mobile media for the FVM app, related to women's issues and gender.
This is the second DTC 354 class to have such a focus. The first, which I taught in the fall of 2010, worked in two teams to generate production plans for independent modules. One of those, Kane's Wanderings, is nearly complete and will be included in the app launched to the public in June. The second, about the story of the Old Apple Tree, also is under production. Our hope is that the DTC 354 class this time generates more potential modules and ideas for this kind of work. The students are using Jason Farman's fantastic new scholarly book, "Mobile Interface Theory," as a foundational text.

Here is a photograph of the group with the book and the app (all images courtesy of Cassie Anderson, National Park Service): 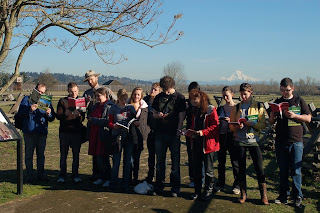 And a couple of individual images of the students on site, using the beta version of the app: 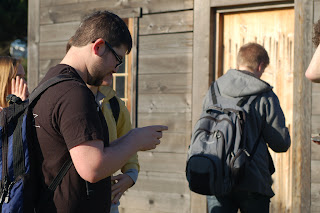 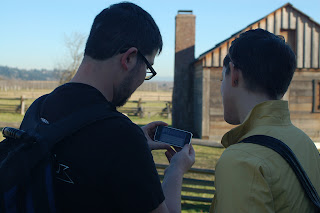 Posted by Brett Oppegaard at 12:51 PM