More video/audio production completed; with a special thanks to the Ke Kukui Foundation and Tommy O's

Another major round of video/audio production is finished (completed on Aug. 18), with more than 50 people now contributing to the Fort Vancouver Mobile project to date. Momentum certainly is building!
Before we move on to the next production mountain, I want to acknowledge and thank everyone who worked so hard this week.
That list includes the Ke Kukui Foundation, especially Deva Yamashiro and Kapuanani Antonio, who recruited and organized about two dozen performers for various roles, featuring: Frank Van Waardenburg (William Kaulehelehe), Virginia MacKenzie (Mary Kaii), Kaloku Holt (soloist/dancer), Hono Yacapin (dancer) and Tommy Owens (dancer). When the video shoot went late, into dinner time, Owens also generously catered an impromptu meal for the cast and crew from his restaurant, Tommy O's, one of the best bistros in the area. We highly recommend Tommy O's, which has one location near Esther Short Park in downtown Vancouver and another in east Vancouver, off NE 192nd Avenue. (Thanks again, Tommy!) In addition, the Ke Kukui Foundation, through its halau Kaleinani o ke Kukui, performed various chants in Hawaiian that we plan to use in the piece, recorded in its studio, including "The Lord's Prayer" featuring soloist Bully Magsayo.
The Fort Vancouver National Historic Site, under the supervision of chief ranger Greg Shine, provided generous support for the project in many ways, too, from arranging the ideal setting and props to the organization of volunteer performers, assisted by Kimm Fox-Middleton. That included the recruitment of historical interpreters -- Douglas Halsey, Aaron Ochoa, Dan Ochoa and Roma Len -- to portray soldiers of the period (pictured above with Frank Waardenburg). Those five graciously endured the heat in heavy wool costumes, take after take, and the soldiers even stuck around to be in the background of the hula scenes.
As for all of these costumes, the fort's costume shop, under the direction of Eileen Trestain, also delivered timely and high quality assistance for several days leading up to the shoot.
The invaluable media specialists, and production workhorses, were videographer Troy Wayrynen and assistant director Jonathan Nelson, while Dr. Dene Grigar from Washington State University Vancouver's Creative Media and Digital Culture program also assisted on site with storyline development and production management.
That is an amazing list of supporters, added to the many other people who also have been contributing so far. I really can't say it enough, but mahalo, again, everyone!
Posted by Brett Oppegaard at 4:08 PM No comments:

The first phase of the Fort Vancouver Mobile project will be to produce a multimedia piece that illuminates the story of William Kaulehelehe (and wife Mary Kaii).
Here is some background material on the couple, contributed by the Ke Kukui Foundation's Kapuanani Antonio: Kaulehelehe bio.
Are here are photographs of William and Mary next to the performers (an image also provided by Kapuanani Antonio) Frank Van Waardenburg and Virginia MacKenzie: 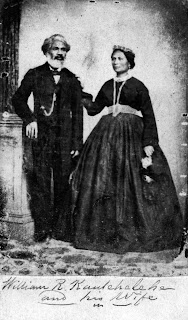 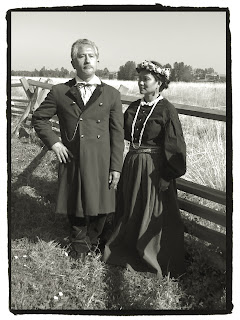 Posted by Brett Oppegaard at 3:30 PM No comments:

A hearty "mahalo!" to Bart Phillips, CEO and president of the Columbia River Economic Development Council as well as a member of the Clark-Skamania Flyfishers!
Phillips and his Clark-Skamania Flyfishers organization worked with Washington State University Vancouver's Creative Media and Digital Culture program recently, through a Digital Technology and Culture 476 class, under the direction of Dr. John Barber, to create this website: Clark-Skamania Flyfishers.
Pleased with the results, Phillips and his group donated money to the program for purchase of hardware and software, some of which directly paid for much needed production equipment for the Fort Vancouver Mobile project.
That included a lavaliere microphone, reflective panels and audio equipment rigging, all of which arrived the very day, Aug. 18, of the most extensive media creation portion of the project to date. The timing couldn't have been better. This equipment as well as other portions of the donation bolstering CMDC labs also will be used in various WSU Vancouver classes, including DTC 354.02, Digital Storytelling, this fall, a service learning project at the Fort Vancouver National Historic Site involving mobile devices.
So thank you, again, Bart Phillips, Clark-Skamania Flyfishers and CMDC's co-directors Dr. Barber and Dr. Dene Grigar for investing the money in this project.
Posted by Brett Oppegaard at 10:40 AM No comments: