Stumbled upon a QR code tour of Long Beach's boardwalk this weekend, including a short text block about Clark's Tree (where William Clark, of the Lewis & Clark expedition, apparently gazed at the Pacific Ocean for the first time, then carved his name into a tree, in 1805). 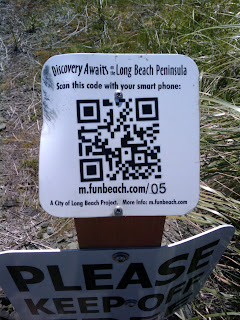 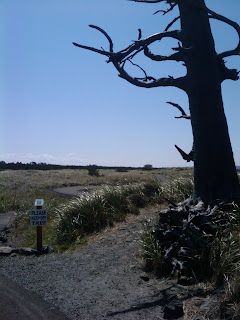 Here is what this particular location code gave me:
This bronze tree represents one on which Captain Wm. Clark carved his name in 1805.

The original tree lasted until nearly 1900. Commissioned by the City of Long Beach, the bronze replica traveled by barge in 2003 from Clarkston, WA., on the Snake and Columbia Rivers, stopping at various ports over a 4-week journey.

Local sculptor, Stanley Wanless, cast the tree in Utah, but it was sent on the river route to follow the final leg of the Corps of Discovery journey to the Pacific Ocean.
Once the barge arrived in Ilwaco, the statue was moved by crane to a trailer which hauled it along Pacific Highway and placed it at its present location.
The setup looked like this: With the plastic sign posted to the top of a wooden post nearby. As you can see (forgive the image quality; it was taken with my phone on a bright sunny day), someone already has tried to pry the sign off, or maybe just pounded on it for fun.
Fort Vancouver has been experimenting with QR codes, too, under the direction of Chief Ranger Greg Shine, and these can be helpful and effective. In short, all I had to do was open up a QR code reader on my Android phone, point it at the code and the code directed me to the URL, which displayed the custom page.
It was interesting to learn about the sculpture's background here, but I also felt like I had so many more questions at this point. I really would have liked to have received much more content, particularly content that engaged me beyond simple Chamber of Commerce newsletter type information. It sounds like this tree had an amazing history, and I suspect preserving it, or at least the memory of it, was a significant community issue. I was impressed that a town the size of Long Beach was using this sort of technology, but I have to say this sign raised my hopes for an experience much higher than what was delivered. Maybe a few lessons learned by all of that.
Posted by Brett Oppegaard at 11:37 PM