The George and Helen Hartzog Awards for Outstanding Volunteer Service

I feel deeply honored and appreciative of the recent announcement that I was chosen as the Pacific West Region's National Park Service representative for the George and Helen Hartzog Awards for Outstanding Volunteer Service this year. This award, named for the former director of the National Park Service, and his wife, who both highly valued the VIP (Volunteer-in-Park) program, recognizes exceptional service within the federal agency's nationwide system. The Pacific West Region -- with national parks in Hawaii, California, Washington, Oregon, Idaho, Nevada, and parts of Montana -- attracted nearly 80,000 volunteers last year, at such parks as Yosemite National Park, Hawaii Volcanoes National Park, Mount Rainier National Park, Joshua Tree National Park, Redwood National Park, etc. To be chosen as the top contributor, among that amazing group, is mind blowing, and an honor I share with everyone who has contributed to this project so far. Thank you all!

Here is the press release making the announcement: 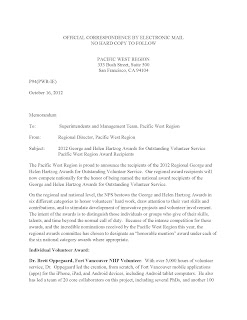 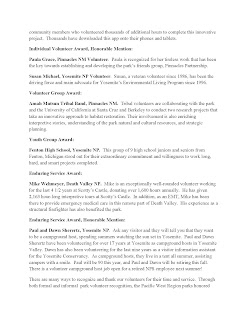 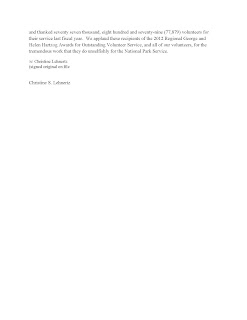 Posted by Brett Oppegaard at 8:30 AM