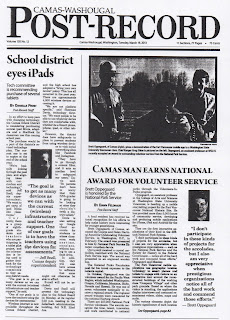 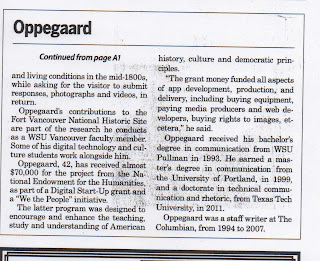 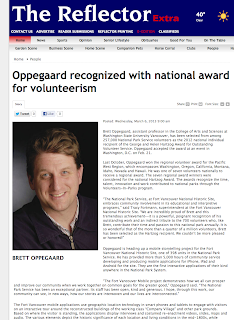 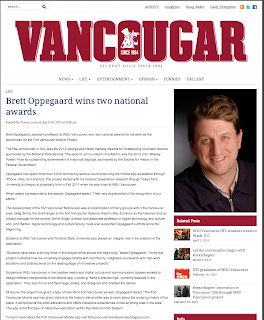 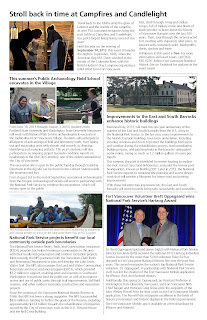 Posted by Brett Oppegaard at 2:23 PM No comments:

NPS version of the Hartzog news ...

Here is the National Park Service's site dedicated to the Hartzog Awards, which includes coverage of the 2012 event: 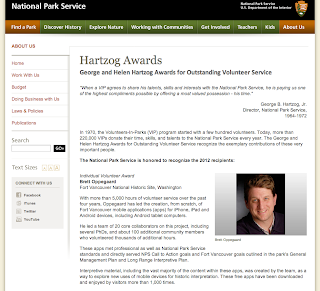 Posted by Brett Oppegaard at 8:29 AM No comments:

Here is the WSU News version of the Hartzog coverage: 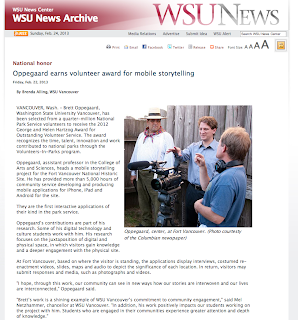 Posted by Brett Oppegaard at 12:52 PM No comments:

After a National Park Foundation-sponsored whirlwind tour of Washington, D.C, and a variety of nearby locales, I'm back, and ready to share what I can about the national Hartzog Award I received on Feb. 21. ... I'll post more soon, but here is the press release:


News Release from: WSU Vancouver
OPPEGAARD RECOGNIZED WITH NATIONAL AWARD FOR OUTSTANDING VOLUNTEER SERVICE
Posted: February 22nd, 2013 9:04 AM
Photo/sound file: http://www.flashalertnewswire.net/images/news/2013-02/48/61944/Oppegaard_Brett.jpg (Brett Oppegaard, assistant professor in the College of Arts and Sciences at Washington State University Vancouver)
VANCOUVER, Wash. - Brett Oppegaard, assistant professor in the College of Arts and Sciences at Washington State University Vancouver, has been selected from among 257,000 National Park Service volunteers as the 2012 national individual recipient of the George and Helen Hartzog Award for Outstanding Volunteer Service. Oppegaard accepted the award at an event in Washington, D.C. on Feb. 21.
Last October, Oppegaard won the regional volunteer award for the Pacific West Region, which encompasses Washington, Oregon, California, Montana, Idaho, Nevada and Hawaii. He was one of seven volunteers nationally to receive a regional award. The seven regional award winners were considered for the national Hartzog Award. The awards recognize the time, talent, innovation and work contributed to national parks through the Volunteers-In-Parks program.
"The National Park Service, at Fort Vancouver National Historic Site, embraces community involvement in its educational and interpretive programs," said Tracy Fortmann, superintendent at the Fort Vancouver National Historic Site. "We are incredibly proud of Brett and this tremendous achievement--it is a powerful, poignant recognition of his outstanding work and an indirect tribute to the 700 volunteers who, like Brett, contribute their time and passion to this national park annually. It is so wonderful that of the more than a quarter of a million volunteers, Brett has been selected as the Hartzog recipient. We couldn't be more pleased or honored!"
Oppegaard is heading up a mobile storytelling project for the Fort Vancouver National Historic Site, one of 398 units in the National Park Service. He has provided more than 5,000 hours of community service developing and producing mobile applications for iPhone, iPad and Android for the site. They are the first interactive applications of their kind anywhere in the National Park System.
"The Fort Vancouver Mobile project demonstrates how we all can prosper and improve our community when we work together on common goals for the greater good," Oppegaard said. "The National Park Service has been an exceptional partner. Its staff has been open, kind and generous. I hope, through this work, our community can see, in new ways, how our stories are interwoven and our lives are interconnected."
The Fort Vancouver mobile applications use geographic location technology in smart phones and tablets to engage with visitors on an interactive tour around the reconstructed buildings of the working class "Company Village" and other park grounds. Based on where the visitor is standing, the applications display interviews and costumed re-enactment videos, slides, maps and audio. The various elements depict the historic significance of each location and living conditions in the mid-1800s, while asking for the visitor to submit responses and media, such as photographs and videos, in return.
Oppegaard's contributions to the Fort Vancouver National Historic Site are part of the research he conducts as a WSU Vancouver faculty member. Some of his digital technology and culture students work alongside him. Brett's research focuses on the juxtaposition of digital and physical space, in which visitors gain knowledge and a deeper engagement with the physical site. Their experience is enhanced as layers of information are unveiled at opportune moments, via mobile technology, while they also get opportunities to participate in the story building.
"We are delighted to have the 2012 Hartzog Award winner on our campus," said Mel Netzhammer, chancellor at WSU Vancouver. "Brett's work is a shining example of WSU Vancouver's commitment to community engagement. His work will enlighten hundreds of thousands of visitors who come to the site each year. In addition, his work positively impacts our students working on the project with him. Students who are engaged in their communities experience greater attention and depth of knowledge."
Oppegaard has received almost $70,000 in grant monies for the project from the National Endowment for the Humanities, as part of a Digital Start-Up Grant and a "We the People" initiative. The latter program was designed to encourage and enhance the teaching, study and understanding of American history, culture and democratic principles.
# # #
Contact Info: This press release was jointly issued by the National Park Service, at Fort Vancouver National Historic Site, and Washington State University Vancouver.
Brenda Alling, Director, Office of Marketing and Communications, 360-546-9601, brenda_alling@vancouver.wsu.edu
Tracy Fortmann, Superintendent, Fort Vancouver National Historic Site, 360-816-6205, tracy_fortmann@nps.gov
Brett Oppegaard, Assistant Professor, College of Arts and Sciences, WSU Vancouver, 360-521-8150, brett_oppegaard@vancouver.wsu.edu
Posted by Brett Oppegaard at 12:21 PM No comments: