The wayside signs in The Village

Two wayside signs are in The Village. These are well done and provide a good comparison of what the wayside sign format (similar to a wall text) offers in terms of density of content, versus what a mobile device at the same place can offer visitors. It also is interesting to compare what information is on the sign, versus what information is in the app, in the same place. 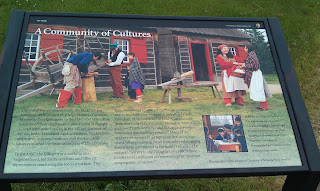 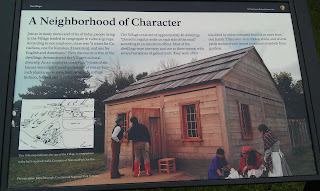 Posted by Brett Oppegaard at 10:17 AM No comments:

When an outdoor app is tested in a rainstorm ...

The first open beta test for the Fort Vancouver Mobile project, as part of the historic site's annual Brigade Encampment on June 18, was yet another reminder to us of how weather dependent use of an outdoor mobile app can be.
Friday, June 17, was an unseasonably hot day. I spent a few hours at the site, making sure the app was primed and ready for testing, and came home with a sunburn. The glare from the intense sun, particularly around noon, made seeing the mobile screen tough at times, but that was a minor usability issue in comparison to what testers dealt with the next day.
Typically, in the Northwest, the skies are gray, and there is sporadic rain. But there usually are clearings, too. On Saturday, the weather was pretty much drizzle to downpour throughout the testing period, which I finally pulled the plug on about 1:30 p.m., after the lunch crowd left the site.
Special thanks are due, by the way, to: Brady Berkenmeier (PI of the Kane's Wanderings module), who helped throughout the day; to Dene Grigar and John Barber of the Creative Media and Digital Culture program at WSU Vancouver for their direct support as well; and to the fort staff, including Chief Ranger Greg Shine and volunteer coordinator Kimm Fox-Middleton, for making our test as comfortable as possible, considering the conditions, including providing a historic tent for us to work under.
The marketing of the beta test seemed to work well this time, with many reTweets and several pieces of direct correspondence generated by the various announcements. Greg even remarked that the mobile app launch was the most talked about part of the Brigade Encampment on the historic site's Facebook page.
A 5K run weaved through the historic site about 10 a.m., and many people (of the hundreds that jogged by) slowed down to look at what we were doing before continuing the run. That was more great exposure for the project.
Those who did test the app during the Brigade Encampment were exceedingly positive about the experience. Yet the rain sleeting sideways, the misting of the screens, the cold fingers trying to manipulate the app, and the difficulty in taking notes as well as conducting paper surveys in such an environment, overall seemed to me to be out of context with what would be typical use. So when the sun returns, or at least the rain stops, we'll be back out there. ...
Posted by Brett Oppegaard at 8:58 AM No comments:

We are conducting our first round of open public beta testing on the Fort Vancouver Mobile app this weekend, from 10 a.m. to 5 p.m. Saturday in The Village at the Fort Vancouver National Historic Site. All other beta tests to this point have been by invitation only. If you are interested and available, just show up and give the app a try (with Android or Apple devices). The test likely will take about 30 minutes, and there is a concurrent special event called the Brigade Encampment, that is a lot of fun, too.

Hope to see you there,

About 20 WSU Vancouver students and faculty members visited The Village today to beta test the FVM app (thanks again to Forrest Burger, Brady Berkenmeier, Nick Hill and Troy Wayrynen for helping with the test, and to Dene Grigar and John Barber for bringing this group to the site).
This was the first time we have tested the PhoneGap app as downloaded from the Android market and Apple App Store, and we had virtually no problems getting the app on the phones this time (Yeah!). We did, though, have GPS location issues that need to be quickly addressed (not so Yeah!). Many of the different handsets did not seem to pick up the first GPS location, and that acted as a gateway (since the later locations are linked in sequential order), keeping the other locations from being properly tested. We do have a debugging bar in the app at this point that allows users to skip obstacles like that, but the debugging skip also seemed to throw off the narrative flow for the users, and deteriorate the immersion in the story. The more one skipped an obstacle, it seemed, the less interested they became in overcoming the next obstacle. In fact, none of the users in this test ended up at the final video scene, completing the Kanaka module (while almost all of the users in previous beta tests completed the app). It's not clear yet to me what the dynamics were with this group that caused the dramatic swing, but I have written comments from the group to analyze and reflect upon. The geolocation ability, essential to the app, also needs a lot of serious attention at this point.
Posted by Brett Oppegaard at 3:37 PM 3 comments:

In the spirit of Clay Shirky's "Publish, then filter" chapter in "Here Comes Everybody," the Fort Vancouver Mobile app team already has produced several iterations that improve the original program. We primarily uploaded the first version of the app for easier testing on site (rather than having to email apk links to potential users, they now can just download the app from the markets). There is about an 18-hour lag in the Android market right now, and it takes about a week for the new Apple versions to appear. Using this "publish, then filter" strategy has allowed us to find several bugs on phone models that we don't personally own among the team members, and to see the ways in which different handsets handle the same coding. At this point, two updates of the original Android app have been posted, and one new Apple version, with additional updates in the pipeline for both as I type. So please make sure to update your app regularly to get the best quality version available.
Posted by Brett Oppegaard at 10:48 AM No comments: