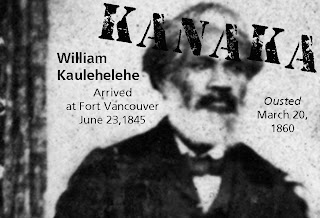 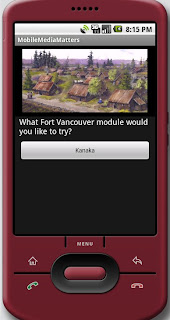 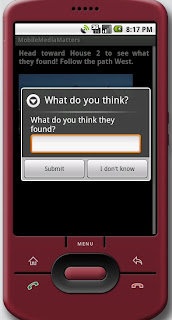 Feedback is always welcome! We are trying to develop this project as much in the open as possible. So feel free to post comments here.
Posted by Brett Oppegaard at 10:54 PM No comments:

Early imagery of the FVM project 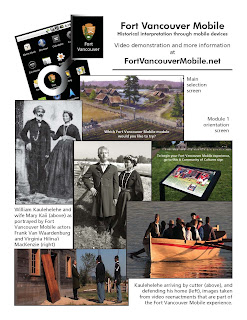 Whipped this mini-poster together quickly as a way to help people begin to visualize what the Fort Vancouver Mobile project is: an innovative and new way to share historical interpretation through mobile devices. This historically based digital media -- video, audio, text, animation -- is being integrated specifically into physical locations (pinpointed by GPS) to create mixed-realities, with users/learners sometimes alternating, sometimes blending digital and physical worlds through their mobile phones.
Posted by Brett Oppegaard at 10:27 PM No comments:

Video production for version 1.0 is finished; thanks, Troy!

After a marathon editing session on Saturday, Sept. 11, videographer Troy Wayrynen and I finally have finished putting together the five video clips that will be included in version 1.0 of Module 1. We decided to try first saving those in mp4 format, at a size of 320X240, in an effort to make small usable files (less that 2 MB) that could be streamed easily. Once we get the kinks of the mobile delivery system of the app out of the way, then I suspect we'll want to increase the resolution to take advantage of the fabulous HD-quality videos we produced. We also are considering posting the high-quality versions of the videos on the web, for users to be able to watch at home. We suspect that will appeal to those who have seen the smaller versions on site and then want to see the high-quality renditions, or for those people who can't make it to the fort, for geographical or some other accessibility issue.


Troy really deserves a lot of credit for his effort on this project, which truly was on a shoestring budget (we used a shoestring one time as a way to give William Kaulehelehe, played by Frank Van Waardenburg, a tie for his costume). At every shoot, Troy worked harder than anyone, often just reacting on the fly, coming up with solutions for the various issues that arose, from lighting to blocking to narrative holes. And the quality of his work on this project was exceptional in every way, extremely creative and ambitious. The final videos you see in Module 1 are almost entirely the result of Troy's vision and talents, and there simply is no way this project could have been made without his unbelievably high work ethic and generosity and continual push to make better images and final videos.
Just one quick example: We started the final round (of at least five different rounds) of video editing at 6 a.m. Saturday, and by about midnight, I could hardly keep my eyes open. We still were trying to finish the last clip. I had no ideas left. The video clearly needed something more, and Troy just kept innovating and experimenting with different Final Cut techniques, until he finally devised a complex concept of layering two clips that also included animating a historical document underneath it all. I was blown away not only by his vision and imagination but also that he just never gave up and never conceded, that the clip was going to be the best one we could make. When you see these videos at the fort, I think you will know what I mean. It is going to be very exciting to share them with you soon!
Posted by Brett Oppegaard at 8:56 PM No comments:

Fort Vancouver's Chief Ranger Greg Shine and I were talking about the Fort Vancouver Mobile project a week and a half ago, and Greg asked how else he could help.
I said we were trying to create a scene in which the protagonist of module 1, William Kaulehelehe, arrived at the site in the mid-1840s, and if Greg could get the Lady Washington to pull up to the beach, and unload Kaulehelehe, that would be fabulous.
Without missing a beat, Greg suggested we might instead have Kaulehelehe arrive on a cutter, and the fort staff and volunteers just so happen to have a cutter, built under the supervision of Douglas Brooks, and a training program for volunteers eager to get some use of the vessel.

So visual editor Troy Wayrynen and I suddenly were on the north bank of the Columbia River on Thursday night, Sept. 9, between 6 and 8 p.m., with ranger Douglas Halsey and cutter coordinator Jeff Cool -- plus the crew: Craig Webster, Dan Ochoa, Mike Twist, Cassie Anderson, Garron Guest and Ben Coder -- all in period costumes, escorting our Kaulehelehe (the fabulous Frank Van Waardenburg) to shore.

The cutter could not reach the beach, so Doug Halsey hopped out of the boat, in water about up to his knees, and Frank climbed on, piggy-back style, and was carried to shore. Doug told me that was the customary way of getting gentlemen to the beach in those days, and he even bowed and gave Kaulehelehe a tip of his hat. It was quite a scene, and I am so very thankful to all of those who took part in making it happen, from Greg Shine to the cutter crew, Troy, Frank, and especially Doug, for helping to put the effort together, and then volunteering to be the crew member who carried William to shore. It was one of the most memorable moments I have had with this project so far, and it just illustrates the kind of generosity and selflessness of everyone who has worked on Fort Vancouver Mobile effort to date. What an amazing group of people we have around here!
Posted by Brett Oppegaard at 2:58 PM 1 comment: