More on the FVM exhibit

The physical and permanent Fort Vancouver Mobile exhibit debuted at the national historic site's visitors' center recently, but I had a chance to shoot a few more photographs of the exhibit last week and thought I would share those:
Posted by Brett Oppegaard at 3:19 AM No comments:

While I was in Victoria this weekend, exhibit designer Lee Pisarek and research assistant Josh Wagner were presenting the debut of Fort Vancouver Mobile's permanent exhibit at the Fort Vancouver National Historic Site's visitors center on National GO (Get Outdoors) Day. This exhibit, funded by a Clark County Commissioners' Historical Promotion Grant, is a way for us to share the video objects of the mobile app in a fun and playful way for people who might not necessarily download the app and use it.

The idea is that the video pieces can be played and shared at the visitors center, and some people might download the free app because of those, and other people, who might not want to use the mobile version, still can get some of the benefits of the media produced in this project. This exhibit also is designed so people might want to sit on the barrels, or stand next to the pelts, and take their picture with this scene in the background.

Volunteer Lee Pisarek designed and constructed this exhibit, with help from Fort Vancouver staff members. Thank you so very much, Lee! ... I will be back in town and plan to stop by the exhibit later this week, and will post more images of it then.
Posted by Brett Oppegaard at 5:38 PM 1 comment:

Finding the Kaulehelehes in Victoria

One of the benefits of coming back to Victoria, B.C., for the Digital Humanities Summer Institute again (during which Fort Vancouver Mobile has been featured prominently in our Creating Digital Humanities Projects for the Mobile Environment course) has been the opportunity to continue looking for material about William Kaulehelehe, the protagonist of our Kanaka module.

Last year, I looked on my own for Kaulehelehe's grave at the Ross Bay Cemetery and couldn't locate it. So during the past year, I made contact with a variety of people who eventually led me to Michael Halleran, secretary of the Old Cemeteries Society in Victoria, who has led tours of the cemetery focused on its prominent Hawaiians.

Michael not only told me about the Kaulehelehes, he also offered to meet me at the cemetery and show me the location of the graves of William's wife, Mary Kaai, and his hanai daughter, Mary Opio. So we met at the Ross Bay Cemetery tonight, and he took me first to William's unmarked grave:

Here is a video of that moment, where he found the grave site:

Michael also took me to another cemetery, the Old Quadra Street Burial Ground, a few kilometers away, where Kaai and Opio also are buried in unmarked graves. That cemetery unceremoniously has been turned into a city park (a group of people were hula-hooping on top of grave sites -- probably unknowingly -- when we arrived), and almost all of the more than 1,000 tombstones at that site have been removed, but, Halleran said, the bodies still are there, including Kaai and Opio. The city's parks department removed most of the markers in 1909, when the site was "renovated" into Pioneer Square Park. At this point, because of the lack of precise records about the site, Halleran said there is no easy way to determine where the women are buried. He was able to determine that Opio was buried in the Catholic part of the cemetery, roughly near this large church marker:

And Kaai was interred in the Anglican part of the cemetery, in a large area of land, near this marker:

Halleran also shared a variety of other insights about the Hawaiians in Victoria, which relates, at least generally to the Kaulehelehes' story: To begin with, if you know the Empress Hotel, the stunning landmark at the heart of the Victoria harbor, you also know, roughly, where Kanaka Row was in Victoria, on the adjacent street, called Humboldt now, which marks the territory of the original Victoria waterfront. Halleran said the Kaulehelehes likely lived on Kanaka Row in the 1860s, in one of the small wooden houses there, and he found the paperwork showing that William was a naturalized British subject, and therefore, at the time, a Canadian citizen as well, which gave him the rights to vote, own land, and run for office, which was much more agency than he was allowed, as a Hawaiian, in the U.S. portion of the Pacific Northwest. He apparently worked as a Hudson's Bay Company clerk, and he and his wife were affiliated with the Anglican church.

Opio (her full last name was Kamopiopio), by the way, died at the age of 15, on June 26, 1864, in what appears to have been a botched abortion. Halleran said there is some documentation and some speculation about what happened, so we are going to look more closely at that story and see what we can find.

Mary Kaai (full last name: Kaiiopiopio) died at the age of 43 (cause and date of death unknown) and was buried on New Year's Eve, the next year, 1865.

I also grabbed the GPS coordinates of these grave sites, so I hope to embed some digital media at that those places some time in the near future, to at least leave a virtual marker of their lives. Will keep you posted!
Posted by Brett Oppegaard at 11:00 PM 1 comment:

In our continuing quest to bridge mobile digital interpretation with journalism, I am working this summer with Fort Vancouver's archaeologist (and PSU adjunct associate professor) Dr. Doug Wilson to document and embed into the ether the process and results from the annual Public Archaeology Field School. I also will be giving a lecture on my research (as part of a public lecture series) and how it could benefit archaeologists (and public historians) on July 25 at Pearson Air Museum.

For more details, see The Columbian article on the series: 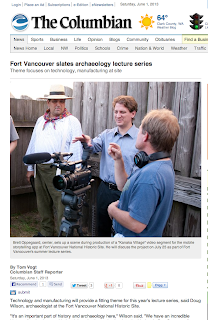 Posted by Brett Oppegaard at 1:15 PM No comments: