While we are building these various mobile apps for place-based attractions, we also are -- of equal importance -- experimenting with different research methodologies enabled by mobile technologies.

This past weekend, for example, our enthusiastic little research team (including Dr. Michael Rabby and research assistants Lucas Wiseman and Joshua Wagner) spent three full days at Vancouver's Festival of Trees testing, among other ideas, how each different mobile medium (audio, video, animation) as well as proximity (to the physical material being presented) affects user perceptions about mobile content.

We had some slow moments, particularly early in the mornings, but, by mid-day and in the early afternoons, we often had three or four tablets running simultaneous tests. At one point, on the first day, we had six tablets running tests for about 30 minutes straight. ... That was very exciting to see.

As part of all of this, we also attracted one famous guest, who wanted to give it a whirl: 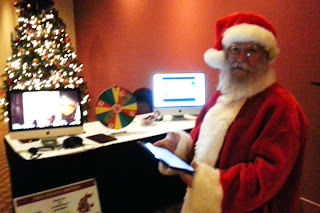 Posted by Brett Oppegaard at 9:47 AM