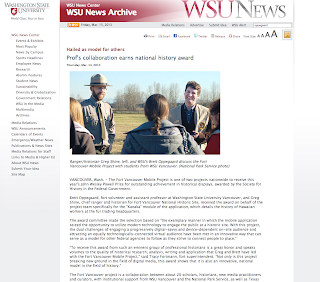 The WSU News article on the Powell prize:

VANCOUVER, Wash. - The Fort Vancouver Mobile Project is one of two projects nationwide to receive this year's John Wesley Powell Prize for outstanding achievement in historical displays, awarded by the Society for History in the Federal Government.
Brett Oppegaard, fort volunteer and assistant professor at Washington State University Vancouver, and Greg Shine, chief ranger and historian for Fort Vancouver National Historic Site, received the award on behalf of the project team specifically for the "Kanaka" module of the application, which details the history of Hawaiian workers at the fur trading headquarters.
The award committee made the selection based on "the exemplary manner in which the mobile application seized the opportunity to utilize modern technology to engage the public at a historic site. With this project, the dual challenges of engaging a progressively digital-savvy and device-dependent on-site audience and attracting an equally technologically-connected virtual audience have been met in an innovative way that can serve as a model for other federal agencies to follow as they strive to connect people to place."
"To receive this award from such an eminent group of professional historians is a great honor and speaks volumes to the quality of historical research, analysis, writing and application that Greg and Brett have led with the Fort Vancouver Mobile Project," said Tracy Fortmann, fort superintendent. "Not only is this project breaking new ground in the field of digital media, this award shows that it is also an innovative, national model in the field of history."
The Fort Vancouver project is a collaboration between about 20 scholars, historians, new media practitioners and curators, with institutional support from WSU Vancouver and the National Park Service, as well as Texas Tech University and Portland State University.
The Powell prize commemorates the explorer and federal administrator whose work demonstrated early recognition of the importance of historic preservation and historical display.
"The Powell prize is one of the most important and prestigious awards given to federal government historians each year,” said Robert Sutton, chief historian of the National Park Service. "This is a huge honor.”
The other winner of this year’s prize is the "What’s Cooking, Uncle Sam?” exhibit at the National Archives.
The society for history was founded in 1979 in Washington, D.C., to advance the unique interests of federal historians and provide a body through which they could address common concerns, support shared interests and stimulate discussion.
Posted by Brett Oppegaard at 10:23 AM