One more segment of the redesign to post about today: After pressing the "pick your path" text or menu button, app users will be directed to the following screen, which has a bar of buttons on the right-hand side that scrolls up and down, allowing users to pick various interactive stories: 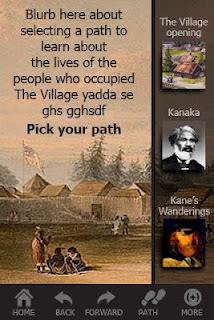 Only our historical review of the background image above (led by Chief Ranger Greg Shine) turned up some concerns. The scene does show a representation of Fort Vancouver, and is meant to be a historic Fort Vancouver scene, but the Native Americans in the foreground of the image are Plains Indians, not Coastal Indians, which raised red flags with the historians about the integrity of the image. In addition, the encroaching of the forest on the fort also is historically inaccurate. So we changed the background to the following, listed by the Yale Collection of Western Americana, Beinecke Rare Book and Manuscript Library, as by "Lieutenant Warre. Paintings described by Mr. C. P. Wilson in an article “Early Western Paintings” which appeared in The Beaver, June 1949 (no. 280)." 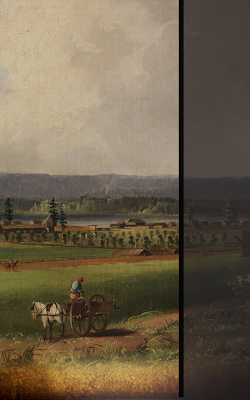 The fort's Chief Ranger Greg Shine said that painting's authorship also is in question (another long post could be made about that discussion), but the public domain image itself passes the visual standards we needed to meet. So it will be used instead.
Posted by Brett Oppegaard at 1:50 PM