Twitter-like dialogue being incorporated into the Kanaka module

One of the different ways we are putting media into the Kanaka module of the Fort Vancouver Mobile project is a Twitter-like animation that turns historic journals and letters into short bursts of locative information.
The first example is related to a Hawaiian pastor's calling to Fort Vancouver in the mid-1800s. This pastor, William Kaulehelehe, ended up being in the center of an international conflict at the fort, as a loyal British subject ousted from his home on the banks of the Columbia River, as the U.S. Army tried to bring order to the frontier in the Pacific Northwest. That's a much longer story, but my hope with this part of the dialogue is to present the discourse of the period as it influenced his decision to come but also as it reflected attitudes of the period, and rhetorical strategies.
I'm using the Twitter format as an inspiration and basically taking the actual historic text and adapting it to the faux-microblogging format (with design advice from Kapuanani Antonio of the Ke Kukui Foundation). 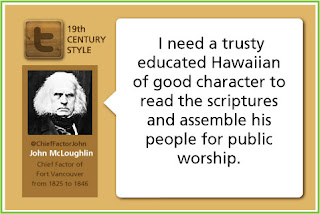 The core script is as follows:

@ChiefFactor John (John McLoughlin): Need a trusty educated Hawaiian of good character to read the scriptures and assemble his people for public worship.

McLoughlin: Need him to teach, too. And interpret.

Judd: Not as well-qualified as the first person selected but @WRKaulehelehe has good character, is faithful, industrious, and a skillful teacher. High recommendation.

Judd: @WRKaulehelehe in regular standing as a member of the church. Wife accompanies him, no doubt will prove herself useful.


More lines and characters will be added in other spots around the site, intending to continue the conversation in a less linear way.
Posted by Brett Oppegaard at 5:54 PM