On my most recent trip to West Texas, in May, I decided to swing through southeast New Mexico to tour Carlsbad Caverns, an amazing World Heritage Site, which also was the research lab for the following academic article:

Novey, L. and T. Hall (2007). "The effect of audio tours on learning and social interaction: An evaluation at Carlsbad Caverns National Park." Science Education 91(2): 260-277.
The same tour that Novey and Hall studied was offered, so I took it, and had a chance to reflect on their findings. In short, the caverns are part of a huge cave system that features many beautiful examples of underground rock formations, from stalactites to stalagmites and everything in-between. At certain times of the year, more than 1 million Mexican free-tailed bats live in this area, and they all leave the cave around dusk each night (pictured above, a fascinating event to watch). It is very difficult to describe any of this in words. But understanding the place in context to humanity is important for sense making.
There are many books and displays in the visitors center, including an Ansel Adams exhibit in which he expressed frustration over not being able to capture the essence of the caverns on film. But there also is the audio tour, which involves carrying around a two-foot long wand, with a keypad on the front. There are 50 signs placed along the main cavern path, and visitors simply type in the corresponding number and then hear a couple of spokespeople, a man and a woman, chatting about what is around that spot.
Novey and Hall found that this tour significantly increased visitor knowledge about the caverns. On the negative side, it also decreased the amount of time visitors interacted with each other in groups, illustrating a common concern about incorporating mobile technology in such situations. There are connections made in the digital world and disconnections in the physical and social surroundings.
One aspect of the study that doesn't seem to be taken into account is the quality of the audio tour. While it is professionally produced, and the speakers clearly are trained broadcast types, the generally inane patter between the two reminds me of the warm-up for the meteorologist on the nightly news.
If this audio was transcribed and coded, I suspect it would be remarkable only in its inefficiency of actually sharing useful information, particularly in transferring knowledge related to the specific location where the sign is located, which seems to be the point. A lot of the scarce information ends up being redundant, and the corny jokes are mind numbing. But this audio tour also shows glimmers of promise, when it mixes period music into the background at times, and especially when it includes interviews with experts or expert commentary on the caverns. Those few clips typically were chatty but also dense with information.
While I was in the area, I also stopped by the UFO Museum in Roswell, N.M., and took its audio tour. 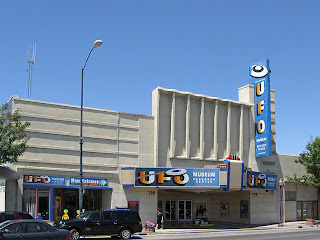 That tape (yes, it was delivered via cassette tape) featured just one speaker, a highly informed and engaged expert, who delivered virtually nothing but dense information, complemented by an occasional radio clip from one of the witnesses to the incident. The content was a highly rhetorical argument for believing the case presented by the museum, that something strange happened in Roswell in the summer of 1947, involving aliens from outer space.
The audio also periodically would include music in the background, to emphasize the emotions of the moment, or to set a scene. It made its argument but also encouraged listeners to explore the material and the ideas for themselves, so there was a moderately open-ended nature to it. There were a variety of production flaws as well, from editing glitches to a lack of location markers and audio guides, which led to disorientation with the material or missed references to objects on display. The tape just played on and on, without explaining where the listener was supposed to be, or when it was time to move to the next exhibit.
More than anything, these experiences just reinforce to me the high value of the researcher having control over and being part of the creation process for the mobile content being delivered and studied. It is more work, of course, but it seems so much more valuable to be able to determine the effects of mobile media when one feels comfortable and confident in the design of that material.
Otherwise, it seems that the research is tainted to begin with, by a faulty tool. I suppose anyone can follow along and criticize whatever content is created, making this argument potentially circular. Yet the quality of the content driving the user experience being studied should be considered, too, and judged as part of the whole, just like methodology and all of the other aspects of the research. Have you seen any studies that do take such facets into account?
Posted by Brett Oppegaard at 5:06 AM